Ladies Sing The Blues on FSB

During the month of November, Front Street Blues will feature a strong roster of female voices.  Make no mistake - women have a firm hold on this genre, and they're not letting go.

Diunna Greenleaf hails from Houston TX and has had no shortage of attention from producers, clubs and festivals all across the country.  Sandy Carroll comes to us by way of Memphis from West Tennessee and is an accomplished songwriter and vocalist who's been recently signed to Catfood Records, joining artists like Johnny Rawls, Barbara Carr and James Armstrong.  Fiona Boyes is a former winner of the International Blues Challenge, she calls Australia home, and she's considered one of the meanest acoustic finger-pickers on the planet.  Likewise, Mary Flower is an adept practitioner of the Piedmont Blues style of guitar, blending folk, roots and Blues with ease, and has a memorable voice as well.  Jackie Johnson will conjure up images of Aretha Franklin and Etta James while paying homage to Gospel roots on her new release Memphis Jewel.  And we can't leave out Carolyn Wonderland's latest effort, Peace Meal, featuring a noble take on Elmore James' Dust My Broom that's produced by Michael Nesmith (yes, ex-Monkee Michael Nesmith!).

Listen for these talented artists, Fridays & Saturdays from 12am until 2am, during the month of November. 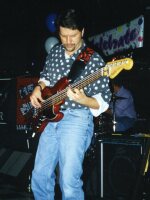