Events
WHQR and StarNews Present "Prologue"
Prologue is WHQR's monthly book discussion, hosted by Ben Steelman of the Star News. Takes place on the second Monday of the month, at 7pm. Prologue is currently hosted via Zoom Webinar.

Update: Listen to award winning North Carolina author Philip Gerard speak about the Cape Fear River, his writing process, and  his adventures writing Down the Wild Cape Fear. The below clip includes Gerard's interesting definition of a river:

Join Ben Steelman of StarNews and WHQR Commentator Philip Gerard for light refreshments and a discussion of the author's new book Down the Wild Cape Fear.

About the Author:
Philip Gerard is the author of seven books, eleven documentary scripts, and numerous short stories and essays. He is currently a WHQR Commentator and recent chair of the Department of Creative Writing at UNC Wilmington.

About Down the Wild Cape Fear:
In his new book, Philip Gerard invites readers onto the fabled waters of the Cape Fear River and guides them on the 200-mile voyage from the confluence of the Deep and Haw Rivers at Mermaid Point all the way to the Cape of Fear on Bald Head Island. Accompanying the author by canoe and powerboat are a cadre of people passionate about the river, among them a river guide, a photographer, a biologist, a river keeper, and a boat captain. Gerard explores the myriad environmental and political issues being played out along the waters of the Cape Fear. These include commerce and environmental stewardship, wilderness and development, suburban sprawl and the decline and renaissance of inner cities, and private rights versus the public good. 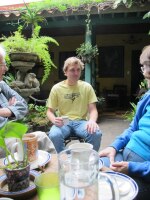