Lost & Found is a show about cultural memory, childhood imagination, and forgotten objects or stories. While each artist has a unique style, all three evoke feelings of whimsy and nostalgia. For this MC Erny Gallery show we tried something a bit different. We asked WHQR listeners to send in their childhood stories or memories pertaining to lost treasures, items you would put in a time capsule, and adventures with first best friends. Our artists used these stories as artistic inspiration to create a small body of work for Lost & Found. Along with these WHQR listener inspired pieces, the artists will display other works born from their own memories and imaginings.

The stories that our artists used as inspiration:

“Chauncey the Rooster” by Heather Caveny

“Memory of Madame Dante and the Chimp” by Fritzi Huber

“An Adventure With My Best Friend” by Linda Serra

Jeff Brown received his MFA from the University of Guanajuato in Mexico, and his Master of Art Education at the Hartford Art School in Connecticut. He earned a BFA degree from the Maryland Institute, College of Art in Baltimore. Brown was an artist representative for the Art Commission of the Pikes Peak Region, as well as a member of the board of trustees at the Colorado Springs Fine Arts Center. He has also served on the advisory board and as the Chair of the Outdoor Sculpture Committee for the Colorado Springs City Museum, The Pioneers Museum. He has shown extensively throughout Colorado, California, and Taos, NM where he has a piece in the permanent collection of the Harwood Museum of Art. He is also represented in the permanent collection of the Colorado Springs Fine Arts Center in Colorado Springs, CO.

Jeff states, "Discarded bits of cultural ephemera, lost artifacts, corroded materials and time-worn weathered surfaces and patinas, evidence of nature's ravaging effects-- these are the particularly romantic and exotic sources that inspire my work. Many of my pieces are nostalgic and reminiscent of once-significant objects, often from my own childhood; a Cracker Jack toy ‘surprise,’ a discarded lead soldier or a fragment of foreign paper currency. The aesthetic criteria for a found object's inclusion in my assemblage or collage is its venerable sense of time, wear and use with a feeling of origins from another time or far-away place. I'm after a sense of familiarity mixed with a feeling of rebirth and even a reaction of challenge or mystery with that which we would otherwise feel comfortable... that, and a purely aesthetic combination of materials, objects, and original artwork."

Katie Caprara graduated with her degree in art from Alfred University in New York. She has shown her work in galleries and sold at auctions up and down the east coast. Her paintings and sculpture have been published in several editions of American Art Collector and she has a painting in a permanent collection at the David Leonardis Gallery in Chicago. In addition to pursuing her independent career as an artist, she taught an art program in NC for elementary grades that integrated art and Spanish studies, and also teaches private art lessons.

Katie says, “I have great memories. I draw on my love of my past to find my subjects for my paintings, and in this case, I’m drawing on the past of others as well. I consider each painting a ‘memory still life’, a vintage depiction that is expressed with colors that for me are retro-reminiscent. I use color to conjure nostalgia, and objects that shepherd in yesterday. It is my goal to depict common, mostly unnoticed, mundane or even obsolete objects in a way that stimulates and further thrills. Ultimately I intend for my paintings to become a source of easy, visual delight.”

Mark Weber has had a long and varied career as both an illustrator and fine artist. His publishing credits are many, including: The New York Times, The Wall Street Journal, Rolling Stone, The Village Voice, The Atlantic Monthly, and many more. Illustrations for children’s books include the Pirate Princess in 2005 and Little Toot & the Lighthouse in 1999. From 2005 — 2010 he was commissioned to illustrate the King School Series, a series of 85 young reader books, which are distributed world wide for urban youths.

Mark’s mediums and styles have varied over the years. “I want to try everything,” he simply states; however, playfulness and humor is central for much of his work, along with love for color and line. Other interests include film and music, providing storyboards and character sketches for film, and writing and performing music he has composed as well as songs by others. Mark maintains a studio at ACME Art Studios in Wilmington, NC.

MC Erny was a devoted friend of WHQR from its earliest days. An accomplished actress and great party host, she was always generous with her time, financial support, and affection for the staff. She worked as a supervisor during many fundraisers and was a weekly presence at the front desk. MC was kind, gracious, elegant, witty and fun to be with. Our gallery space has been named in her honor.

The MC Erny Gallery is located in WHQR's studio in The Warwick Building at 254 N. Front Street, downtown Wilmington. Call WHQR at (910) 343-1640 for more information. The Gallery is open Monday - Friday from 10am - 4pm and during Fourth Friday Receptions. 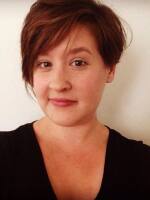