Born in Salisbury, Robertson graduated from UNC-Chapel Hill in 1955 and later went to work at the investment firm Kidder Peabody. He founded Tiger Management in 1980, one of the nation's first hedge funds, which grew to more than $21 billion dollars in assets.

In 2000, Robertson and his wife Josie gave $24 million to establish the Robertson Scholars Leadership program, which allows 36 students each year to take classes at both UNC and Duke.

The New York Times credited Robertson with pushing "short-selling into the mainstream, helping to create the modern hedge fund industry."

Robertson gave away an estimated $2 billion of his fortune over his lifetime, according to Reuters.

The Navy veteran is survived by three sons and nine grandchildren. 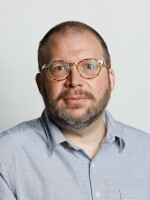 Bradley George
Bradley George is WUNC's AM reporter. A North Carolina native, his public radio career has taken him to Atlanta, Birmingham, Nashville and most recently WUSF in Tampa. While there, he reported on the COVID-19 pandemic and was part of the station's Murrow award winning coverage of the 2020 election. Along the way, he has reported for NPR, Marketplace, The Takeaway, and the BBC World Service. Bradley is a graduate of Guilford College, where he majored in Theatre and German.
See stories by Bradley George