It’s called a Trash Trout, and its main purpose is to reduce the amount of macro plastics in the river. Kemp Burdette, the Cape Fear Riverkeeper, described the project as the team installed the device.

“So this is the first of these types of litter collection devices installed here. We can easily remove the trash on a regular basis, and then we're gonna get an idea of just how much this stuff pulls out," he said.

The trash trout also helps with data collection. Rob Clark is the Water Quality programs manager at Cape Fear River watch; he broke down how it all happens.

“And so we're basically doing a three-year process to study microplastics across the state. We took water samples and we sent those off to Watauga county. They do the analysis of the water to see if there's microplastics in it," he said.

The main goal is to stop bigger plastics from breaking down into microplastics. Burdette wants to emphasize the importance of stopping macro plastics at the source, from becoming microplastics in the ocean.

“UV light starts to break down plastic pretty quickly, it starts to turn into tiny little pieces, sometimes pieces that you can barely see with the naked eye, and so removing macro plastics now close to their source, takes them out of the environment before they can, you know, get broken down by UV and friction and getting tumbled down the stream," he said.

Clark explained how the device works to trap plastics and other debris.

“What this device is, is a square rectangular fence of metal fence, link, and posts. And it's got two pontoons on the side that allow it to float. And then how it stays in the water and doesn't float away is it's affixed to two steel rods that are cemented in the ground and cable is used to hook the two pieces together. And on that cable is essentially a little buoyant boom that forms a V shape that funnels all floatables into that centralized caged area, which we maintain," he said.

The group tested the amount of microplastics in the creek before the installation and saw high levels. Their hope is that by the end of the 3-year project, the amount of microplastics in the river will be significantly reduced as macro-plastics are removed. The installation will be completed in the next couple of weeks and maintained over the next year. 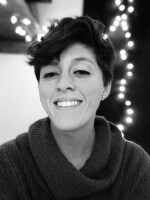