Scroll down for video interviews

This page documents the only known coup d’état in American history. A 2008 memorial on North 3rd Street in downtown Wilmington commemorates the coup, yet the significance of the event has not reached Americans’ collective consciousness. Through the resources collected here, WHQR hopes to advance the conversation about this seminal American tragedy. Below you will find interviews conducted with Wilmingtonians on the topic of the 1898 and what it means in the 21st century, as well as an interactive map which chronicles the historical events surrounding the coup.

This map was produced with the help of research from LeRae Umfleet’s A Day of Blood: The 1898 Race Riot and Cape Fear Rising, a novel by Philip Gerard. Both are excellent resources for further exploration. Thanks to the Cape Fear Museum and UNC Libraries for the use of historical images.

In 1898, Wilmington’s population was majority black, and the city was a post-Reconstruction mecca for African American advancement. Three of ten members of the Board of Alderman were black, and African Americans accounted for 30% of the area’s skilled craftsmen. Alexander and Frank Manly owned the only black daily newspaper in America.

The massacre that occurred that year took place against the backdrop of an election. Post-Civil War, North Carolina politics were dominated by Republicans, the party of Lincoln, and Democrats, the party of Southern landowners. Populists represented a powerful third party. In the 1890s, Republicans and Populists joined forces: a political merger known as Fusion. Populists attracted farmers and white workers, while Republicans commanded the African American vote. Fusionists passed election laws that enfranchised African Americans, and the Fusion government in Wilmington included three black aldermen.

In 1896, the Fusion coalition once again swept the state election. Democrats knew the only way to defeat this bloc of black and white voters was to stir up white supremacist fervor. The Democratic campaign of 1898 relied on “men who could write, men who could speak, and men who could ride” (Umfleet 38)—a combination of fiery speeches, vicious journalism, and white terrorist groups intimidating black voters.

The campaign was effective across the state. But unfortunately for Wilmington Democrats who wanted to replace Fusion politicians, municipal elections were not due until 1899. It was against this backdrop that a small group of wealthy white leaders decided to overthrow their city government.

Below are comments from Wilmingtonian's on the topic of the events of 1898 and what it means in the 21st century.

Community Activist Hollis Briggs, Jr. discusses the shadow of 1898 over the Wilmington of today. He's standing at the former site of the Daily Record newspaper, which was burned to the ground in 1898. Are we still living under that shadow?

Community Activist, writer and poet Delthea Simmons is asked if she finds Wilmington a racist city, and how one might work to get past that.

Hollis Briggs, Jr. talks about the election of 1898, and what it meant for the city.

Local business owner and historian Gwenyfar Rohler stands at the site of the Daily Record newspaper, and points out that the Wilmington Journal is 100 feet down the street.

Philip Gerard continues his description of Waddell's speech at Thalian Hall in 1898.

Delthea Simmons talks about race and education, and getting over the fear.

Hollis Briggs, Jr. offers his comments on what Wilmington, and the Cape Fear Region, can do for the economy and the underserved population of the area.

Wilmington's Confederate Street Names Are Here To Stay -- For Now

CoastLine: Wiley Cash On The Marrow Of Tradition

CoastLine: Lauren Collins On Language, The Gender Pay Gap, And The Coup D’Etat of 1898

1898 Monument to be Dedicated

Communique: Inshiradu Receives Support From Cucalorus For 1898 Narrative: “What the River Knows”

Rachel Keith
Rachel is a graduate of UNCW's Master of Public Administration program, specializing in Urban and Regional Policy and Planning. She also received a Master of Education and two Bachelor of Arts degrees in Political Science and French Language & Literature from NC State University. She served as WHQR's News Fellow from 2017-2019. Contact her by email: rkeith@whqr.org or on Twitter @RachelKWHQR
See stories by Rachel Keith 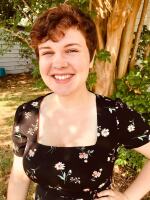 Annabelle Crowe
Annabelle Crowe is an undergrad at Rice University majoring in the Study of Women, Gender, and Sexuality, as well as a published poet. When she’s not working with the news team at WHQR, you find her listening to podcasts and drawing sci-fi comics.
See stories by Annabelle Crowe